Jubaland on Saturday sent its delegation to the late Garissa Senator Yusuf haji’s prayer meeting held in Masalani, Ijara, further showing the role he played in championing for peace.

“As people from Jubaland, we only have fond memories of the role Mzee Haji had in bringing us together. He was a true statesman who meant well and would go an extra mile to ensure that lasting peace was attained,” said Hussein.

He added: “Many were the occasions when he travelled to Kismayo to meet leaders from both sides with the sole purpose of ensuring that we peacefully co-exist as brothers and sisters. He was such a towering leader who oozed a lot wisdom that  we will surely miss.”

Hundreds of people drawn from the constituency Haji represented twice in Parliament and once as a nominated MP converged at Masalani Baraza Park. They could not hold tears as his sons narrated Haji’s last moment.

His son, Director of Public Prosecutions Noordin Haji, said his father’s death had united the country since people of different political opinions congregated to give their last respect to the fallen senator.

Noordin disclosed that before his father died, he told them to donate his six-month salaries to orphanages and use part of it as bursaries. It was one of his dying wishes. His family said they will honour it. 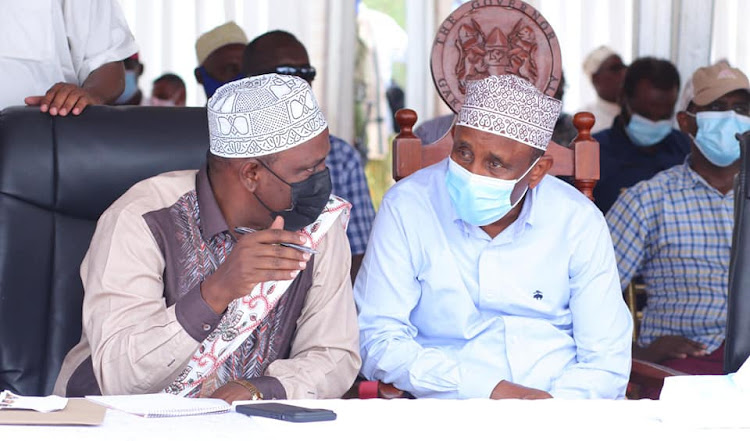 “Going forward, we intend to donate our late father’s six-month salary that he earned while dispossessed to orphanages, as well as bursaries to students in the sub counties of Garissa. The money will be handed over to the Kenya Red Cross, which will reach out to the needy,” Noordin said.

Garissa Governor Ali Korane said the county will work closely with the family to complete all projects initiated by the senator.

He said the county will look for ways of remembering the late lawmaker, noting that naming an institution or a street after him will be an option.

“Let the death of Senator Haji unite us as leaders and residents because that was always his wish. To my fellow leaders, let us  emulate the spirit of servant-leadership espoused by the late Senator,” said Korane.

President Kenyatta described Haji as an outstanding leader who served the country with commitment throughout his life. In a speech read by CS Ukur Yatani, the head of state said Mzee Haji walked with him throughout his political life, noting that he benefitted immensely from his wise counsel.

“I always held very constructive and candid discussions with Mzee Haji on my various political manoeuvres and most fundamentally on the future of this country. His personality and strength of character was best manifest to me as my political mentor,” he said.

Although leaders avoided politics in the meeting, the Treasury CS said locals will give Haji a respectable send off if they endorse the current constitutional amendment bill.

“We should give support to BBI that has a sign of our late senator,” said Yatani.

Former leader of majority Aden Duale and former governor Nathif Jama said that it will be a major setback if the request to have the constituency split is not fulfilled.

The late senator died after a long illness at Aga Khan on Monday last week.

Press Statement by the Prime Minister of the Federal Somalia H.E. Mohamed Hussein Roble responding to the unconstitutional statements issued by the Office of...