Mogadishu:– The African Union Mission in Somalia (AMISOM) is conducting training for the police in Somalia-both at the federal and federal member states level, to enhance their capacity to secure the upcoming electoral process.

The 14- day training by AMISOM police is intended to equip the Somali police with the knowledge and skills in securing the elections, and will be conducted in Mogadishu, Southwest, Jubaland and HirShabelle States.

So far, the training has been conducted in HirShabelle and Southwest States of Somalia, and will soon commence in other areas.

The training in HirShabelle State and Southwest States, were conducted in Jowhar and Baidoa, the respective Administrative capitals of the two states, ending on 25 and 30, December, respectively.

Presiding over the closing ceremony in Baidoa on Wednesday, Superintendent of Police (SP) Thaimu Balie Sesay, the AMISOM Police Head of Training and Development for Southwest State explained that the training is aimed capacitating Somali Security Forces, to enable them take the lead in securing the elections, and ultimately, take over the security responsibility of their country, when AMISOM finally exits.

“Over 50 officers selected from the various stations and departments from within the state benefited from the training, which was conducted from 16-30 December, 2020” SP Sesay explained.

Some of the topics covered during the training included, introduction to electoral administration, importance of elections, the Somalia electoral security plan, responsibility of a police officer, electoral conflict and violence, crowd control techniques, the election security framework, threat assessment and public order security.

In Jowhar, Assistant Superintendent of Police (ASP) Alusine Foday Kargbo, who was also the lead trainer, said the training was aimed ensuring that the officers discharge their duties efficiently and effectively, so as to create a conducive environment for peaceful and secure parliamentary and presidential elections.

“The aim of this course is to ensure that we equip the participants with the requisite knowledge, skills and attitude that will enable them to deliver quality and efficient service to their community especially before, during and after the elections,” ASP Alusine stated.

On his part, Middle Shabelle Police Commander, Major Aden Yarow Hussein thanked AMISOM for organizing the training, which, he said, was timely and would reduce problems that would undermine voter confidence and ultimately the outcome of the elections.

“I first would like to thank God and then AMISOM for organizing this important training, led by Mohamed Yusuf.  It is my hope that you all gained skills from this training on election security,” the Police Commander said and lauded AMISOM police trainers for their tenacity.

“I also want to thank them (AMISOM) again for the effort they have invested in conducting this training. I appreciate their level of tolerance and their commitment to ensuring we gain knowledge,” he added.

The Director of Security Operation and Immigration for Southwest State Ministry of Security, Abdisalam Ibrahim Mohamed, said the knowledge gained from the training will help the participants execute their duties more effectively.

“Since the mandate of the ministry is to ensure security in the South-west state, it is a privilege for me to attend (the closing ceremony) of the training that has been going on for the past 14-days. This training will uplift the skills of the southwest state police commanders and their deputies,” Abdisalam stated.

“We received training on how to counter problems during and after elections to ensure that no issues arise. I consider the training we received as an essential one since this is our duty,” Ahmed Abdulle Madobe, a police officer who attended the training in Jowhar said.

AMISOM in collaboration with the Somali Police Force (SPF), and SNA are tasked with providing security during elections and to ensure safety of election materials and officials both at the Federal and State levels to ensure free, fair and credible elections.

The training is part of a grand programme being conducted by AMISOM Police and is aimed at educating and preparing the Somali police for the forthcoming electoral process. 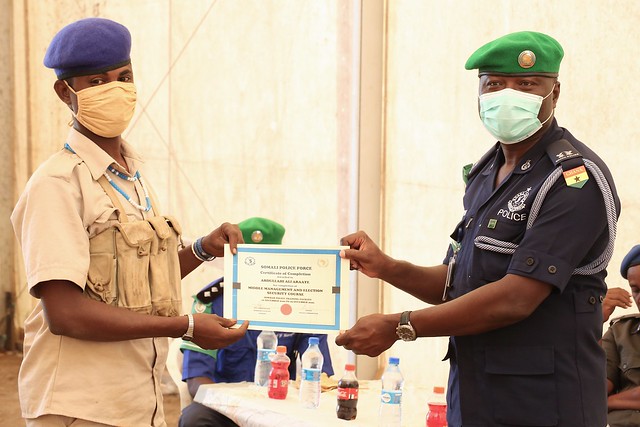 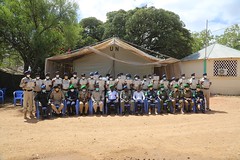 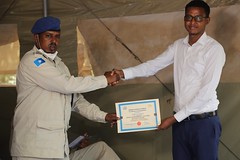 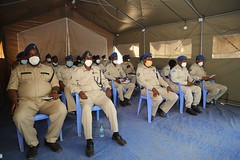 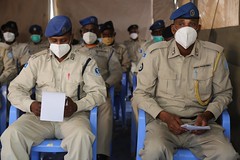 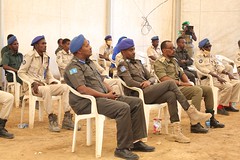 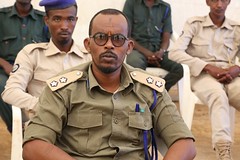