Baidoa:Somalia- “I would like to see changes that address our interests,” Nurta Mohamed, a resident of the Qasab 2 camp for internally displaced persons (IDPs), said today at a gathering in the city of Baidoa, in Somalia’s South West State.

Ms. Mohamed was sharing her views on a new, permanent Constitution for her country.

She was one of more than 100 people attending a three-day public consultation meeting held as part of Somalia’s constitutional review process, which was launched in 2018 and aims to replace the current Provisional Constitution, adopted in 2012, ahead of the ‘one person, one vote’ elections scheduled for 2020.

Organised by the federal Ministry of Constitutional Affairs (MoCA), with the support of the United Nations Assistance Mission in Somalia (UNSOM), the gathering closed today. It was attended by a range of community representatives, including clan elders, youth, women, persons with disabilities, and religious leaders.

“The people have expressed their views on what they would want to see considered during the review,” said MoCA’s Public Outreach Director, Abdikani Ali Adan.

“Amongst the issues the people of South West State are interested in is having the Constitution in the regional Maay dialect and using dialogue to solve outstanding political issues before finalisation of the Constitution,” he added.

The participants exchanged views on issues pertinent to power- and resource-sharing, federalism, elections, the justice system and national security.

Speaking during the meeting, the Director-General of the South West State’s Ministry of Constitutional Affairs, Jeylaani Abdullahi Haji, said the consultations were important for the inclusion of citizens’ views and concerns.

“Everyone here is representing hundreds of other people from South West State, who could not attend. We hope that the people present are going to look at the interests of the residents of the South West State and give their honest and unbiased views,” said Mr. Jeylaani. 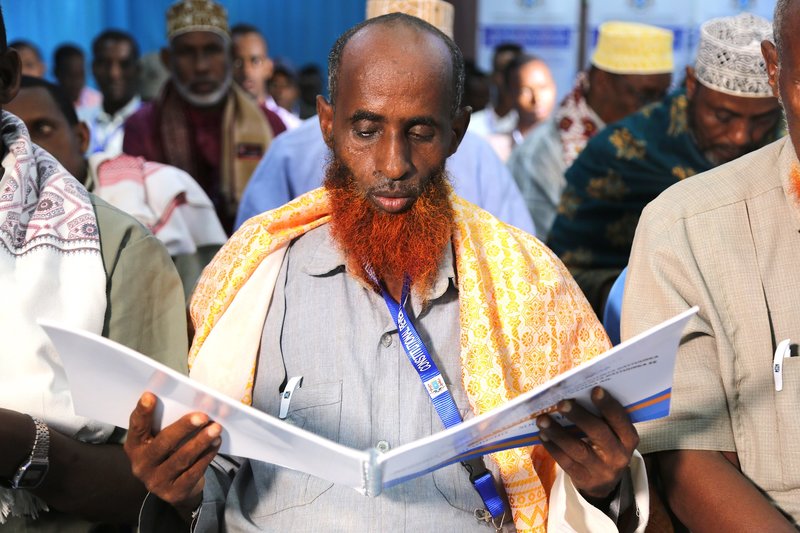 “The Constitution needs to be based on women’s interests. Although there is a narrative that women should have a thirty per cent quota, that is not enough. We have to get fifty per cent. Our representation should not be confined to government and parliament but we have to be represented everywhere, including the ministries and other government institutions,” stressed Ms. Shueb.

Representing people with disabilities, Mukhtar Ali Isak said the Constitution needed to ensure their rights and participation in national development.

“We want people with disabilities to have the opportunity to participate in politics, with representation in political parties, local councils, parliament, independent committees, and other institutions. This is our request to the federal government and the federal state that we live in,” said Mr. Isak.

The Baidoa District Commissioner, Hassan Moalim Ahmed Bikole, encouraged the participants to utilise the opportunity to participate in an inclusive and transparent dialogue toward finalizing the Constitution.

“Your views are paramount. If you do not participate and point out what is wrong and what is right, you won’t be playing your role as citizens,” said Mr. Bikole. “This is your chance to participate in this national campaign and correct any mistakes you see so that you don’t feel excluded.”

The meeting was the second of an ongoing nationwide outreach campaign, which will cover all of Somalia’s Federal Member States with the aim of enabling citizens to contribute to the Constitution-making process.