Mogadishu:-The Head of the African Union Mission in Somalia (AMISOM), Ambassador Francisco Madeira, has pledged to work closely with the new Mayor of Mogadishu and Governor of Banadir Region, Omar Mohamud Mohamed, to ensure the mayor’s vision of a more secure and peaceful Mogadishu is realized. Mayor Mohamud Mohamed assumed office in August.

“I found an extremely committed and engaged man who has the population of Mogadishu at heart, and wants a very important thing for his people. He has taught me a very important slogan: ‘A peaceful people in a clean city’. I was very impressed because this slogan summarizes security, stability and development. I told the mayor that AMISOM will support him to the measure of our ability, and that we will work together on this,” Ambassador Madeira said after his meeting with the mayor at the Banadir Administration Headquarters in Mogadishu.

“We discussed the issue of the upcoming 2020/2021elections, and the need to ensure that this election is secure and takes place in a free, fair and stable environment. We discussed how we can work together in the context of the established Somalia Election Security Task Force,” Ambassador Madeira added.

Somalia, with the support of AMISOM, the United Nations and other partners, is preparations for one-person-one-vote in late 2020/2021, which would be an important milestone in the rebuilding of the country after more than two decades of violent conflict.

Other aspects the two leaders explored included avenues for engagements involving civilians and the military operations, for the benefit of the people of Somalia.

Addressing the press, Mayor Mohamed expressed gratitude for the Ambassador’s visit, saying that their deliberations had been rich and promising.

“The Ambassador has welcomed all our requests, which are based on the partnership we have. AMISOM has for long played an important role in Mogadishu, and Somalia as a whole,” the mayor said, and further paid glowing tribute to AMISOM force’s peace-keeping operations from the time they first arrived in Somalia to help degrade the Al-Shabaab terrorists.

“AMISOM forces and their leadership have stayed nights at the frontlines and under difficult conditions in this city. They have spent time with our forces. From the start, Mogadishu residents, Somali forces and AMISOM forces worked together with the objective to free the city of Mogadishu from the enemy. It is that unity which resulted in the liberation of Mogadishu,” the mayor said. 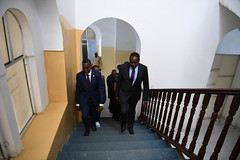 British and Malaysian men jailed in Somalia for terror offences.