More than 30 participants from the Somali national security forces have concluded a five-day course on gender equality and human rights.

The participants drawn from security agencies of the federal and state governments were taken through sets of rules, regulations and laws on gender equality and human rights to ensure compliance to international humanitarian laws as required by the United Nations and the African Union.

The train the trainer (TTT) course was conducted by the African Union Mission in Somalia (AMISOM) in partnership with the British Peace Support Team. Speaking during the closing ceremony, on Thursday, the Special Representative of the Chairperson of the African Union Commission, Ambassador Francisco Madeira, said the training was important in helping Somalia’s security forces comply with international rules and regulations on human rights.

“The training is in recognition that the work of building the capacity of Somali national security forces involves not just training in hardware but also on issues of compliance,” Ambassador Madeira noted.

The training, the SRCC observed, was meant to not only ensure that AMISOM and SNSF, operate under the global and regional norms established by the African Union and the United Nations, but also promote the participation of women in the security sectors.

He hailed the enthusiasm exhibited by the participants, adding that their decision to plan and execute the course, fitted well with the AU Mission’s preparations for the gradual handover of security responsibility to Somali national security forces.

The British Ambassador to Somalia, David Concar, who also attended the ceremony, lauded the participants for taking part in the training and urged them to promote gender issues in their respective federal member states and work places 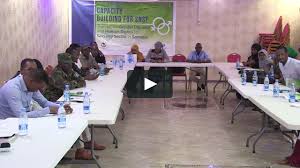 ADFD-funded solar project to light up, power city in Somaliland.